In heterogeneous catalysis, gas bubbles forming at the surface of a catalyst block its overall efficiency. Gaseous (nano)bubbles can form spontaneously, but they can also controllably be generated by an external applied potential. The electrolytically generated bubbles can have dimensions from nanometers up to many micrometers. Nanobubbles with volumes in the range of 102 – 108 nm3 have been reported to be stable at the solid-liquid interface for days. On the other hand, electrolytically generated nano- and microbubbles grow with time and eventually detach as a result of buoyancy. Electrochemical control of the catalytic surface enables manipulation of the gas bubbles and therewith allows optimizing the efficiency of the catalytic surface.

In this project, we will investigate the gas evolution under electrolytic conditions, with the primary aim to control the formation of bubbles and their release from a catalytic active surface. Moreover, in addition to the formation, coalescence, growth and detachment, we will also investigate damage induced by the bubbles at the interface. Complementary techniques are used, including optical interference-enhanced reflection microscopy, attenuated infrared spectroscopy and atomic force microscopy, both in the conventional imaging mode but also employing high-speed AFM spectroscopy. 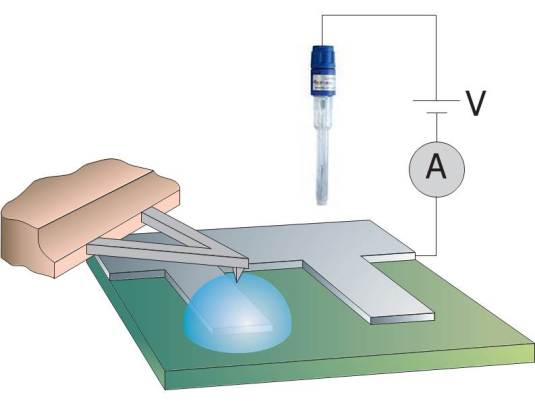 Surface nanobubbles and surface nanodroplets: Theory and numerics for dynamics and collective effects

Transporting gas away from a catalyst surface