The Soft Condensed Matter group at UU was among the first to investigate both in experiments and simulations the self-assembly (SA) of nanoparticles (NPs) inside the confinement of slowly drying liquid emulsion droplets. The resulting colloidal crystalline ‘supraparticles’ (SPs) have sizes still in the colloidal domain, so that another SA step is possible. It was found that the spherical confinement influences the SA process in intriguing and important ways compared to bulk SA. Here we want to use the experience obtained and optimize binary SPs for C1 catalysis (Fischer-Tropsch FT) using monodisperse Fe-Co-oxide NPs as the main component for the SP synthesis. We will mainly focus on visco-elastic high shear processing to obtain relatively monodisperse droplets. Initially, the NP synthesis, using existing procedures, will need to be optimized for FT catalysis (particles size, composition, stabilizer removal). Secondly, we will focus on binary SPs with structural analogs with a NaCl lattice, but also will explore different binary options. The second component (silica or polymer) can be used to induce extra stability to the catalytic NPs (e.g. against sintering) and/or to optimize the flows of heat and chemicals for FT catalysis. 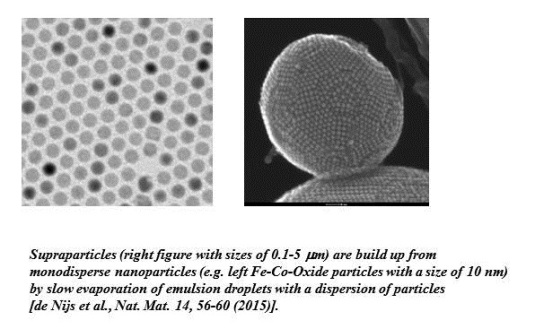 Liquid-phase TEM and cryo-TEM of fundamentals of catalyst assembly