Professor Detlef Lohse is Distinguished University Professor of the University of Twente (The Netherlands).

Lohse received his Diploma degree in Physics from the University of Bonn (Germany) in 1989, in the field of theoretical high energy physics. After obtaining his PhD degree on the theory of turbulence from the University of Marburg (Germany) in 1992 under the supervision of Professor Grossmann, Lohse has worked in the period 1993-1995 as a postdoctoral fellow with Professor Kadanoff at the University of Chicago (USA). He became research assistant at the Department of Physics of the University of Marburg in 1995 and obtained his “Habilitation” in Theoretical Physics from the same university in 1997. In 1998, Detlef Lohse was a Heisenberg Fellow of the Deutsche Forschungsgemeinschaft at the Ludwig-Maximilians University in Munich (Germany). He was promoted to full professor of physics of fluids at the University of Twente in 1998. Lohse (co-) authored ~ 340 publications in peer-reviewed journals with an average number of citations per paper of ~ 24 and a Hirsch index of 45.

He is the editor of Journal of Fluid Mechanics, Physica D, Nonlinearity, Journal of Turbulence, Journal of Statistical Mechanics: Theory and Experiment, and Physik Journal, and was editor and editorial board member of European Physical Journal B, Physical Review E and Annual Reviews of Fluid Mechanics. He obtained an ERC Advanced grant (2011) from the European Research Council and he leads four FOM programs. He has received various research awards, including the 2012 G.K. Batchelor Prize of the International Union of Theoretical and Applied Mechanics and Journal of Fluid Mechanics, the 2005 Spinoza Award of The Netherlands Science Foundation (NWO), the 2009 Simon Stevin Meesterschap Prize from the Stichting Technologische Wetenschappen (STW), the 2011 Physica Prize of the Dutch Physics Society, the 2012 Wim Nieuwpoort Award for Scientific Computation, and the 2012 AkzoNobel Science Award.

The research of Lohse’s Physics of Fluids group, focusing on granular matter; and micro- and nanofluidics, is characterized by the direct interaction of experiment, theory, and numerics, is problem-driven and often uses methods or knowledge from neighbouring science fields.

Lohse is an elected Member of the Royal Netherlands Academy of Sciences (2005-onwards), the Koninklijke Hollandsche Maatschappij der Wetenschappen (2012-onwards), the German Academy of Sciences “Leopoldina” (2002-onwards), Fellow of the American Physical Society (2002-onwards) and of the Institute of Physics (2004-onwards). He was knighted by the Dutch Queen as “Ridder in de Orde van de Nederlandse Leeuw” in 2010. Lohse serves on various national and international boards and panels for research, including member and now vice-chairman of the Executive Board of Stichting voor Fundamenteel Onderzoek van de Materie (FOM) and also of NWO-physics, Member at Large of the APS-Division of Fluid Mechanics Executive Board, and Chairman of the Euromech Turbulence Conference Committee.

Professor Hans Kuipers is Full Professor at the Department of Chemical Engineering of Eindhoven University of Technology (The Netherlands).

He graduated in 1985 at the Department of Chemical Engineering of the former Technical University of Twente (The Netherlands). In the same year he started his PhD at the Reaction Engineering group of the University of Twente on detailed microbalance modeling of gas-fluidized beds. In 1990 he received his PhD degree and was appointed in the same year as assistant professor in the Reaction Engineering group headed by Professor van Swaaij. In 1994 he became associate professor in the same group. In 1999 he was appointed full professor in Fundamentals of Chemical Reaction Engineering at the University of Twente. He moved in 2010 to Eindhoven University of Technology (TU/e) as full professor Multiscale modeling of Multiphase Flows. Kuipers (co-) authored ~ 300 publications in peer-reviewed journals with an average number of citations per paper of ~ 22 and a Hirsch index of 47. Furthermore, Kuipers is the (co-) author of 180 conference proceedings publications, 2 national journal publications, 4 book chapters and 2 patents/patent applications.

The Multiscale Modeling of Multi-phase Flows group, headed by Professor Hans Kuipers, has made over the years seminal contributions on the fundamentals of chemical reaction engineering. During the last 5 years the focus has been mainly on: (a) a fundamental understanding of multiphase flows; and (b) the development of novel reactors. The key aspect of this research is the integration of fundamental research with applied engineering science. Within these two topics computational fluid dynamics and various experimental techniques play a pivotal role. His group is internationally recognized as one of the leading research groups on Dispersed Multiphase Flow and Novel Reactor Concepts.

He serves/served on the editorial boards of Particuology, International Journal of Multiphase Flow and Acta Mechanica. Kuipers obtained a prestigious TOP CW NWO (2005) grant from The Netherlands Science Foundation (NWO) and an Advanced ERC grant (2010) from the European Research Council. Kuipers has been involved in the organization of several international congresses, including the International Conferences on Multiphase Flow, the International Conferences on the Application of Computational Fluid Dynamics in the Process Industries, the 3rd Conference on Computational Fluid Dynamics in Chemical Reaction Engineering, the 22nd International Symposium on Chemical Reaction Engineering and the 14th International Conference on Fluidization. Kuipers has been Scientific Director of the Institute of Mechanics, Processes and Control (IMPACT) of the University of Twente (2006-2010) and serves/served on several boards and panels for research, including the Strategic Council of the University of Twente. 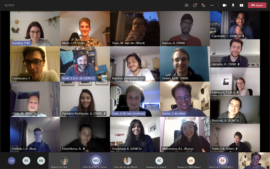 ‘Catalysis for CCU: Valorisation of CO and CO2 through Carbon Capture and Use’ is a multidisciplinary network of scientists, connected with […]