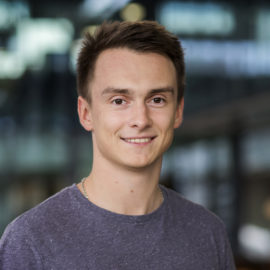 Congratulations Valery! If I’m correct you have investigated the interaction between palladium and cerium oxide, what did you find?

Typical heterogenous catalysts consist of often costly transition metals dispersed as small particles on the surface of the support to maximize their use. Recently it was shown that it is possible to disperse metals into isolated atoms on the support. The common issue of such “single-atom catalysts” is their stability under actual reaction conditions. In this work we have shown that during CO oxidation the stability of palladium single atoms supported on ceria is strongly dependent on the properties of the support. Using advanced characterization techniques we found that doping of the ceria lattice with palladium atoms strongly influences the redox properties of the support. This in turn aided stabilization of surface palladium sites in isolated form under reaction conditions. Although the main findings of this work mostly pertain to fundamental and mechanistic aspects, we believe that this knowledge is vital for the design of novel catalysts for automotive exhaust gas abatement, where palladium-ceria combinations are often used.

Did you have to pull some special tricks to get the in situ measurements?

Large part of the in situ characterization was performed using synchrotron radiation facilities. Typically to get this precious time at the synchrotron you have to write a research proposal which is then reviewed and evaluated by a special committee. Nowadays the competition is quite high as more and more scientists across many disciplines turn to synchrotron-based techniques. Fortunately for us, some of the proposed approaches (e.g., near-ambient pressure resonant photoelectron spectroscopy) were quite novel and required special equipment. Thus, the access to the unique facilities, such as CIRCE beamline at ALBA synchrotron, was well justified and as a result was granted with a beam time.

What are/could be the impact of the results from this publication?

It is of course difficult to foresee, but I hope that the approach of using a combination of in situ spectroscopic tools together with (transient) kinetic methods will become more and more popular in the field of catalysis. This approach is relevant in particular for interfacial catalysts, where both metal and support constitute an active site. In regards to more specific findings of the work, I think the understanding that the redox properties of the support can strongly influence the structure of the metal sites under reaction conditions, can be used for the knowledge-driven design of more stable and efficient catalysts.

You have worked with researchers from France/Italy, China and Spain – How did you get to know each other?

Some of the researchers were already involved in other projects of our group. With some we got in touch when we were formulating a specific research question or writing a research proposal for a synchrotron beam time. For me it was a pleasure to work with these people from different parts of the world, who could share their unique knowledge of the applied techniques. Besides, travelling is cool but travelling for science is even better!

Could the results from your research be applied to other catalytic reactions?

The insight that oxygen transfer between the support and metal can govern the catalytic properties of the materials can be certainly useful for other reactions. A year ago we published another paper related to CO2 hydrogenation, in which oxygen spillover process was found to be relevant for activation of CO2 molecules at the cobalt-ceria(zirconia) interface. I hope that works concerning other catalytic reactions will follow. After all the effects discussed in our publication are one of the many manifestations of metal-support interactions – key concept of modern heterogeneous catalysis.

What could other researchers at MCEC learn from this research?

I think a take-home message is that the interface catalysts, especially those of low nuclearity, are very dynamic during catalytic action and we have to develop methods and approaches how to deal with their complexity. This work is an example of how a combination of spectroscopic techniques and kinetic studies allows understanding of certain aspects of intricate underlying chemistry. Another message that I would like to pass on: it takes a team to tackle a scientific problem, thus one should always look for companions on this journey.

Was publishing a paper in Nature Catalysis any different from other journals?

Formally the process is similar to other journals. After the first submission it might take up to ten days for the editor to decide whether the paper is of sufficient quality to be sent out for the peer review. So in this respect this pre-review is already a certain barrier to overcome. Then, after another month or so, you receive the reviews, and this is when the paper starts to be shaped into its final form. In fact, owing to the deep interest of one of the referees we designed some extra experiments that really helped to understand the system better and strengthened the story. After several rounds of such iterations the paper is finally accepted. In my case, the whole process took quite some time (~10 months), but I do not regret it, as it truly helped making the story better.

Thank you very much Valery!