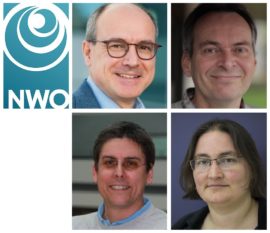 More details about the two projects:

Nanoplastics: Origin, Structure and Fate
Prof B.M. Weckhuysen, Utrecht University
Troubling images, showcasing the large amount of plastic litter that contaminates our waters and threatens wildlife, have become a regular focus of the popular media. Not everyone realizes that we cannot account for a very large fraction of the plastic that escapes into the ocean. A significant portion of this “missing plastic” is hypothesized to result from the degradation of plastics and are named nanoplastics. A multidisciplinary team will now use a breakthrough approach to investigate the formation, presence, and distribution of nanoplastics in aquatic environments. They will study size, structure, and composition of nanoplastics, their transport across the ocean, as well as their interplay with and impact on the Earth’s aquatic microbiome. The reactivity of nanoplastics will also be assessed, allowing to investigate potential degradation pathways, including those involving microbial interactions.

Self-Assembled Icosahedral Photonic Quasicrystals with a Band Gap for Visible Light
Prof A. van Blaaderen, Utrecht University
Photonic crystals are important for many research areas and applications because they enhance the interaction of light with matter in an unprecedented way. Here we plan to make both periodic and quasi-periodic photonic crystals by using colloidal self-assembly, an inherently scalable and inexpensive approach. These crystals will have a so-called photonic bandgap for visible light, the equivalent of an electronic bandgap for electrons. The study of such structures, and how they can influence light, will not only provide new fundamental knowledge about quasicrystals but will also have applications in e.g. data manipulation, lighting, sensing and photocatalysis.

More information about the NWO ENW Groot Grant can be found in the pressrelease.