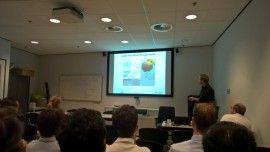 The second Labtour on the 20th of August at University Twente was a good opportunity to see how meetings and lab visits can create a common exchange of knowledge from the point of view of physicists, chemists and engineers.

Prof. Albert van den Berg gave a short introduction on the project cluster Nanoreactors and an insight in how certain techniques can make experiments running cheaper and more exact. Prof. Detlef Lohse did the same on the project clusters Nanobubbles and Fluidic Systems and explained more about the Ouzo effect.

Two individual projects were presented by Alvaro Moreno Soto and Edwin Dollekamp in the lecture hall as well as during the labtour on site, along with other research subjects and facilities. For example the 8m tall bubble column and why research on detaching bubbles from surface is relevant for catalysis; a high pressure nano reactor; several lab-on-a-chip projects; and how research is done on relevant applications like decreasing the fuel consumption of ships with several % by using a bubble bed under the hulk.