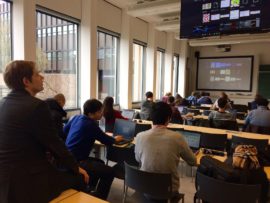 Last Friday 17 February, Ivo Filot gave PhDs a lot of insights as how to work with Photoshop and InDesign during his workshop ‘Impress with your poster’.  Apart from our own MCEC PhDs, the workshop was also attended by students from related research groups from Utrecht University as well as Eindhoven University of Technology and Twente University.

“I’d never used Indesign before, I make my posters in Powerpoint. Or rather I’d used to, because I’ll continue using InDesign. The basic training by Ivo and the chance to mess around a bit with the program, helped me a lot. With his knowledge I can improve the poster I’ve prepared for the MCEC Annual Meeting. I also liked that this time, the feedback on my poster was solely on the design.”
– Jeroen Vollenbroek, participant

Often scientists are required to make posters to present their scientific work. For many years, Powerpoint and Publisher (both from Microsoft) were the dominant tools employed in academia for the design of these posters. Alternatively, InDesign in conjunction with Illustrator and/or Photoshop can be used for the creation of high-quality posters and is considered among the people working in graphical design, typography or publishing to be the de-facto standard in desktop publishing software.

The usage of InDesign can be daunting at first due to the large set of options and settings to configure and this is mainly the reason why a lot of people prefer the much simpler Powerpoint or Publisher. As such, the trainer Dr. Ivo Filot focused on the usage of InDesign. In this workshop, he explained:

Vera Smulders: “I have some self-taught experience with InDesign and Illustrator. But I’d never had a course before, so this was very useful. I’ve learned some new things, like how to combine multiple forms into one and how to use certain features, to name a few. This training had a good balance between theory and practice, and the round of feedback was very valuable, I can get to work now. I used to be not the best of friends with Illustrator, but that might change after all.”

The announcement of the workshop was met with such enthousiasm that MCEC Office had to close the registration early and dissapoint several interested PhDs. A new workshop is being considered. Please check this website (Page: Events) regularly for more information and our calender.