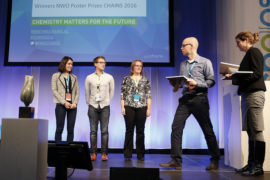 “This CHAINS Poster Prize was an unexpected but welcome surprise. Of course, I put a lot of effort into my poster and talk, making sure that both experts and laymen would find the whole clear, orderly and appealing, but with 250 participants, one doesn’t really assume to win.

“I did notice however during the conference, that my efforts were already paying off: people complimented me on getting this far while yet being ‘only’ a master student, and I was aware of my own enthusiasm every time I spoke about the research. I remember thinking to myself: I’d wish I’d have another year to spend on this. That’s always a good sign, of course, but the interesting talks I had, and the reward in the form of the prize, really confirmed to me that I’m not only passionate for this research but also competent.

“What I like about the project I’ve been working on, is that it’s a combined project from Andries Meijerink’s Condensed Matter & Interfaces, and Bert Weckhuysen’s Inorganic Chemistry & Catalysis. I made use of the knowledge of both groups to synthesize my Y2O3:Ln3+ temperature nanoprobes and deposit them on α-Al2O3, a widely used support material in catalysis. First, the idea was to grow the temperature probes directly in another catalytic support, namely into the mesoporous silicate SBA-15, but with that the analysis turned out to be too intricate. The change to separate the synthesis and deposition of the temperature nanoprobes on α-Al2O3 and the usage of α-Al2O3 as support enabled us to actually characterize the system.

“The poster I presented at CHAINS explained how this system works. Beforehand I made sure to gain feedback on my drafts. I asked my supervisors, naturally, but also and especially my fellow students. Whether it’s for a poster or a presentation, like the one I’m practising now for my thesis presentation, I always benefit from their remarks and opinions since their input is truly invaluable.

“Soon, I’ll be off to Finland, where in February I will start a research internship in the field of Atomic Layer Deposition at the University of Helsinki. After that, I certainly hope that 2017 has a PhD in store for me.”