In fighting climate change, renewable energy is poised to play an essential role to displace the use of fossil resources for covering our primary energy demand. Due to its intermittent nature, it is essential to store renewable energy. Doing so in chemical bonds is not only very efficient but also offers opportunities to convert CO2 waste into chemicals. In this project, the researchers develop novel catalysts for the reaction of CO2 with renewable H2 to methanol. For this purpose, a surface science approach will be followed in which thin oxide films will form the support to metal atoms, cluster and nanoparticles. Understanding the complex chemistry taking place at the interface between the metal and the support is envisioned to open new opportunities for tailoring the design of the next generation of efficient catalysts for storage of renewable energy.

Heterogeneities in activity among or even within catalytic particles are common, but poorly understood. To eliminate variations in activity and thus optimize the catalyst activity, tools are necessary to characterize individual catalytic reaction events with high spatial and time resolution. It has until now not been possible to visualize each step in the catalytic process. The goal of this project is to do exactly this. Using fluorescence correlation spectroscopy, catalytic reactions will be followed on the level of individual events: the diffusion of the reactant molecule, adsorption on the catalyst, reaction, desorption of the product, and diffusion out. 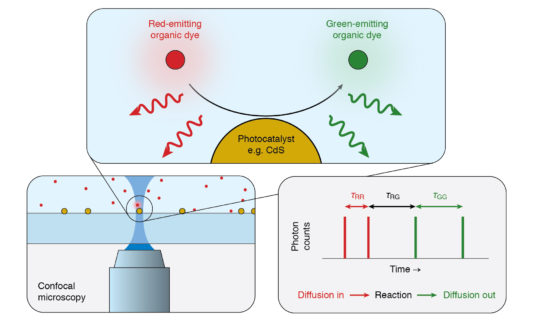 The use of sunlight to produce fuels is emerging as an important strategy to develop a sustainable and environmentally benign economy. However, the quest for systems to efficiently produce solar fuels poses major challenges. This proposal addresses some of these challenges by investigating novel photocatalytic membranes based on self-assembled nanorods which are functionalized on opposite sides by reduction and oxidation catalyst nanoparticles. These composite nanostructured membranes hold promise as water-splitting photocatalytic systems, as they synergistically combine spatially separated oxidation and reduction functionalities with efficient photoinduced charge separation in the nanorods upon sunlight absorption. 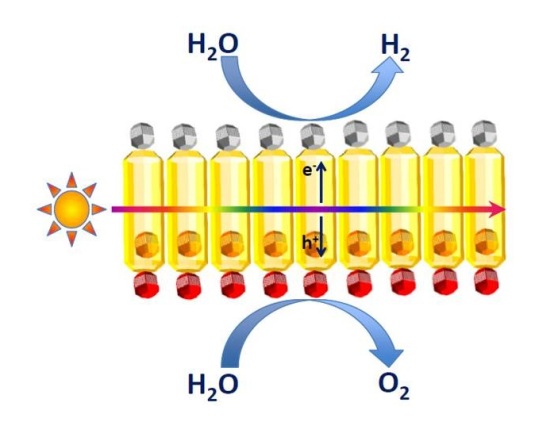 Hydrogen fuel production powered by sunlight is a perfect candidate for future zero-emission energy technology. The efficiency of fuel production by this method depends very much on how well the evolution of hydrogen gas bubbles in water can be controlled. The project intends to gain new fundamental insight in the processes and parameters associated with hydrogen bubble generation and transport, and use that insight to optimize the design of solar fuel generators. 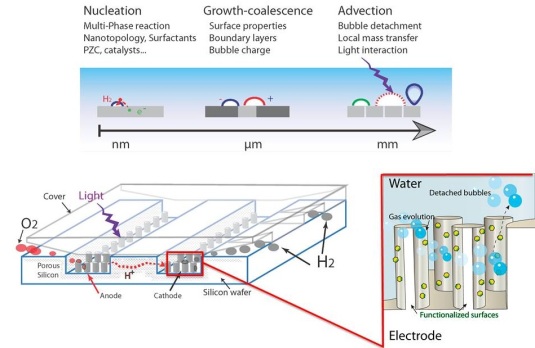 The search for more effective materials for e.g. biomass and solar catalysis is hampered by the wide variety of variables, such as temperature, pressure as well as catalyst composition and structure, all of which naturally lead to the exploration of a large experimental space. One way to perform so many catalytic testing experiments is to develop high-throughput tools. This approach has been developed over the past two decades. Giving the fact that catalytic solids are very heterogeneous in nature, and inter-particle heterogeneities are more the rule than the exception, it would be very advantageous if we could bring the high-throughput experimentation approach one step further. This can be done by studying the activity of single catalyst particles. This requires the integration of microreactor technology, single particle separation and analysis, as well as the integration of various analytical methods within microreactors. This is the goal of this project in which we will develop optical methods, more specifically electronic and vibrational spectroscopies, which allow characterizing inline the activity and properties of single catalyst particles for relevant reactions in the field of biomass catalysis, photo-catalysis and and solar catalysis. This approach will add to the general strategy of single catalyst diagnostic platform, as will be developed by Utrecht and Twente University researchers within the MCEC program. 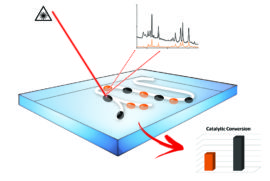 Advanced X-ray photoelectron spectroscopies under both well-defined and in-situ conditions will be applied to investigate design parameters of model photoelectrodes for the production of CO2 neutral Solar Fuels. Mastering catalyst support interactions is crucial for designing efficient catalytic systems – even more in a photoelectrochemical device, where the catalyst support also plays the role of the light absorbing unit. Dynamic XPS under external bias will be used to study charging and decharging processes and dielectric properties of the photoactive multilayer systems. By lab as well as synchrotron based near ambient pressure XPS chemical changes, like oxidation state, adsorbate structure are accessible and can be studied in the presence of gas and vapor phase reactants (H2O, CO2). Relating these insights with (photo)electrochemical testing and fast transient absorption spectroscopy will result in optimal design parameters for multilayer photoelectrodes. 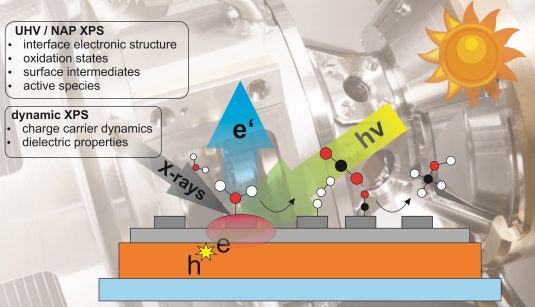 Insight in the physical conditions during catalytic reactions is crucial in realizing a better understanding of catalytic processes. Parameters like temperature, pH and concentration of reactants are often measured as average values. Information on the inhomogeneous distribution, local variations in time and place, are hard to monitor in a chemical reactor loaded with catalyst particles. It is the aim of this project to develop luminescent nanoprobes to measure temperature with high spatial and temporal resolution during catalytic reactions. The probes will consist of luminescent quantum dots or lanthanide doped nanocrystals, which show characteristic, temperature dependent luminescence spectra in the relevant temperature range 300-1000 K. To stabilize the nanoprobes, a silica shell can be grown around the nanoparticles. The silica shell can also be used in to include additional functionalities, e.g. pH sensitive luminescent dye molecules or luminescent species which show selective quenching by specific reactants, to extend the applicability of these novel nanoprobes. The final goal is to realize sensitive nanoprobes to provide insight in the distribution of temperature and other reaction conditions in chemical reactors, and for this purpose the nanoprobes will be embedded in shaped catalyst particles, such as mm-sized extrudates and pellets. 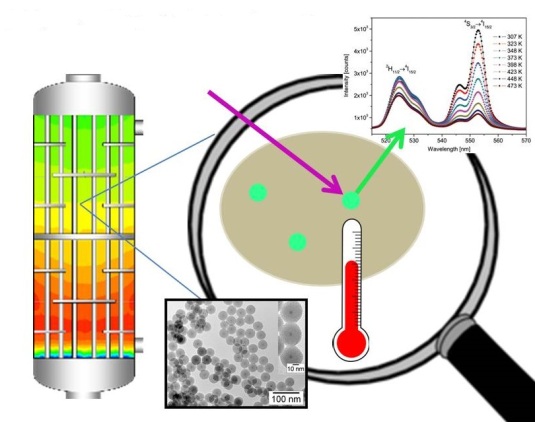 “For outstanding achievements and leadership in the field of sustainable chemistry and catalysis research”, prof. Bert Weckhuysen (UU) is being […]