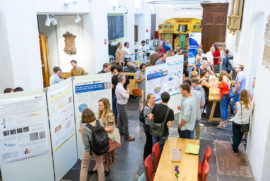 At the end of August, from 24 – 27, a large number of MCEC’s researchers had the opportunity to dive into the world of catalysis during Catalysis Connected. 16 engaging lectures divided over 4 days were given in the beautiful venue Museum Speelklok in Utrecht. There was a lot of interaction between the lecturers and the audience and enough time left for exploring the city. MCEC organised this event as a post-conference of Europacat 2019, together with Viran, Dutch Catalysis Society and ARC CBBC. We are happy to have given our researchers the chance to intensify their knowledge and meet established academics in the field of catalysis.