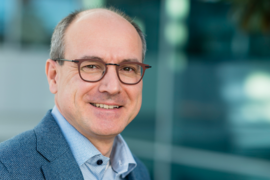 With effect from 1 January 2018, Bert Weckhuysen has been appointed Distinguished Professor in ‘Catalysis, Energy and Sustainability’ at Utrecht University.

Utrecht University has appointed a select group of professors as distinguished professors, academics whose work and standing transcend national and disciplinary boundaries. Rector Bert van der Zwaan: “Bert Weckhuysen’s appointment as a distinguished professor of Utrecht University will enhance the visibility of catalysis and energy research in Utrecht and will therefore also play a major role in the strategic theme of sustainability. The unusual thing about Bert’s assignment is that he will be experimenting with a new structure in which education, research and social applications are closely intertwined.”

Click here to read the full article and/or to watch a video in which Bert Weckhuysen talks about his plans, and colleagues and students in turn talk about him.