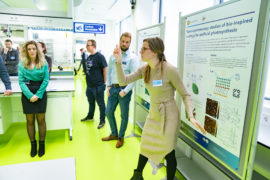 ARC CBBC’s opening of its first own lab was celebrated last Wednesday 13 February on the fourth floor of the Vening Meinesz Building B of Utrecht University. Speeches were given by Utrecht University Rector Magnificus Henk Kummeling, President of the ARC CBBC Supervisory Board Marjan Oudeman and ARC CBBC Scientific Director Bert Weckhuysen. The official opening act was executed by Henk Kummeling and Dean of the Faculty of Science Isabel Arends, by filling a glass version of the ARC CBBC logo with a blue liquid. You can read more and view a photo gallery of the festive opening on ARC CBBC’s website.

You can also read about the opening on the newspage of Utrecht University, on the Netherlands Government’s website dedicated to Topsectoren (in Dutch), or on online magazine Agro & Chemie (in Dutch).